The director of an asbestos consultancy firm based in Bromley, Kent has been given a suspended jail sentence after removing asbestos without a licence and doctoring air test results.

Southwark Crown Court was heard on 13th September 2012 that Absolute Asbestos Ltd was hired to remove all the asbestos insulation from the boiler room of a home in Camden. Mr Horrey, the sole director of the asbestos consultancy firm, did the work over eleven days in July last year.

The court heard that not only was Mr Horrey not licensed for the removal, he failed to effectively clean and decontaminate the area. He left visible fibres that were a danger to the householders and to the plumbers, who were due to start work in the boiler room.  He then instructed an analyst to take an air test which resulted in a certificate clearly showing the site had failed.  Mr Horrey provided a doctored report to the owners indicating it had passed the test and was safe for them to re-enter and in trusting his alleged professional instruction, they did. 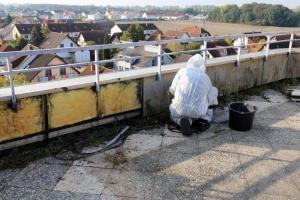 Mr Horrey, of Jackson Road, Bromley, Kent, had pleaded guilty at an earlier hearing to three breaches of the asbestos regulations between 18 and 29 July 2011 at Greencroft Gardens, NW6. He was given six months’ prison sentence on each charge, to run concurrently and suspended for two years; 300 hours’ unpaid community service; given an electronic curfew between 9pm and 6am for three months; ordered to pay £11,340 to the affected Residents’ Association in Camden and ordered to pay £10,160 costs.

After sentencing HSE Inspector Dominic Ellis, who investigated the incident, said he was appalled by Mr Horrey’s reckless disregard for the law and various persons safety in the full knowledge of the dangers caused by exposure to asbestos “He clearly set out to deceive these householders but, worse than that, he was apparently content to put them and the plumbers who had been booked shortly afterwards at risk”.

Armco has over 15 years industry experience and take seriously the risks posed by asbestos fibre inhalation. We are fully qualified in the services we offer and do so in a friendly and professional manner. In addition to consultancy and advice you can trust, we offer all types of asbestos surveying, various types of asbestos related training, a respiratory mask face fitting and both licensed, and non-licensed removals. Call the office on 0161 763 3727 for a competitive quote.

Or visit our site